Movie marathons require pillows, snacks and the stamina to last the night with your eyes wide open. I think Jay and Silent Bob Strikes Back was playing the last time I attempted one. I certainly never expected the Sydney Opera House to go there, least of all with Joss Whedon’s 90’s pop culture classic Buffy the Vampire Slayer. 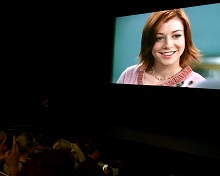 The nearly 400 seat Playhouse Theatre was full to the rafters however, as the lights dimmed around 11pm, the A.V. Club’s Buffy Binge-a-thon felt like a great night in with a group of old friends. We cheered for heroes and villains alike, booed the hapless characters we love to hate and at times, even broke into song.

I’m not kidding. The musical episode Once More, With Feeling came with the kind of audience participation that would put the The Rocky Horror Picture Show to shame.

The pizzas (courtesy of Samsung) were a welcome late dinner (or early breakfast depending on your point of view), the appearance of the ghoulish ‘gentlemen’ from the Emmy nominated episode Hush were positively wicked, the Buffy colouring sheets will not be given to my kids, nor will my Sunnydale High Certificate.

Congratulations Danielle Harvey the founder and creator of Sydney’s Bingefest, on a sensationally crafted and executed event!

Tickets are now available for All About Women which will be taking over the Opera House on Sunday, 5 March. This festival is also co-curated by Danielle Harvey and looks amazing.