You could read Craig Silvey’s award-winning novel Jasper Jones from deep inside your freezer and still feel the oppressive heat of the Australian summer of 1965.

There isn’t a single word wasted and every line rings true. Whether thirteen year old Charlie is debating whether or not it’s possible for Superman to ever be truly brave without fear, working up the courage to speak to a girl that he fancies, or trying to solve a murder, his thoughts and feelings leap off the page and it’s impossible not to find yourself in his shoes. 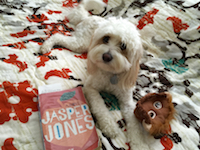 I found the small mining townsfolk’s casual racism, brutality and small mindedness terrifying and yet, there was friendship, innocence and courage there too. It drew me in and kept me turning the pages late into the night. The ensemble of characters are brilliantly crafted and best friend Jeffery and survivor Jasper often threaten to steal the show.

Actress, playwright and all around incredible human being Kate Mulvany has adapted   Jasper Jones for the stage and the Belvoir St Theatre production will be running in Sydney from 2 January until 19 February 2017.

The film adaptation, co-written by author Craig Silvey and Shaun Grant and directed by Rachel Perkins, stars Toni Collette, Hugo Weaving and Dan Wyllie alongside the three young leads Levi Miller, Aaron L. McGrath and Angourie Rice. Jasper Jones will be in cinemas in early 2017 and from the trailer, it looks sensational!